Read the full report below, or download the PDF for later. 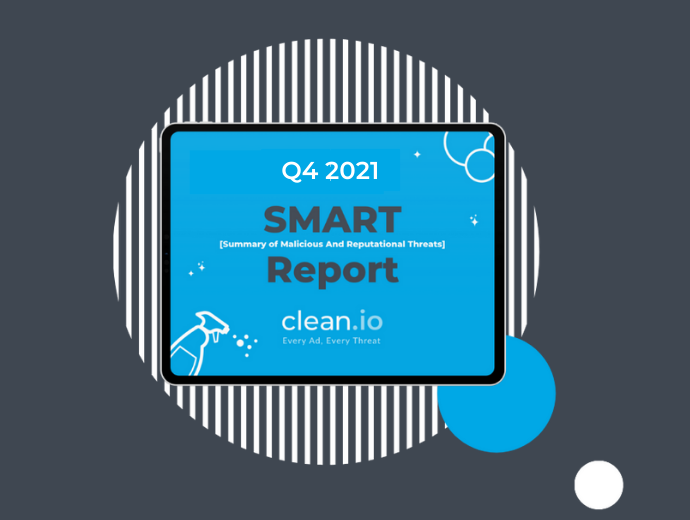 ← Don't Have Time to Read The Full Report Now?

We'll email you a downloadable PDF version of the guide and you can read later.

Coming off a volatile Q3 that saw several large spikes in malicious landing page attacks, redirects returned in Q4 as the dominant form of attack type. These attacks primarily targeted mobile devices and their native browsers, unlike Q4 2020 where Facebook was most targeted.

Client-side and server-side exploits saw continued growth with new threats via user’s browser extensions, and websites compromised by supply chain attacks. This growth furthers the need for security solution that protects the entire page and session, not just ‘wrapping’ ads.

All in all, Q4 displays a multitude of active bad actors responsible for a variety of threat classes, often utilizing different threat vectors to evade detection from traditional anti-malvertising tools and exceed the scope of their protection, further increasing the need for a future-proof, preventative approach to site and platform security.

This report is built using impression and threat data gathered from sites across the entire cleanAD network.

The data included in this report is collected through behavioral analysis of tens of billions of impressions each month, in real time, on over 8 million websites and apps.

Malvertisers are becoming more sophisticated and harder to detect.

In Q4 2021, there was a surge in redirect attacks from several different threat actors, late in the quarter: 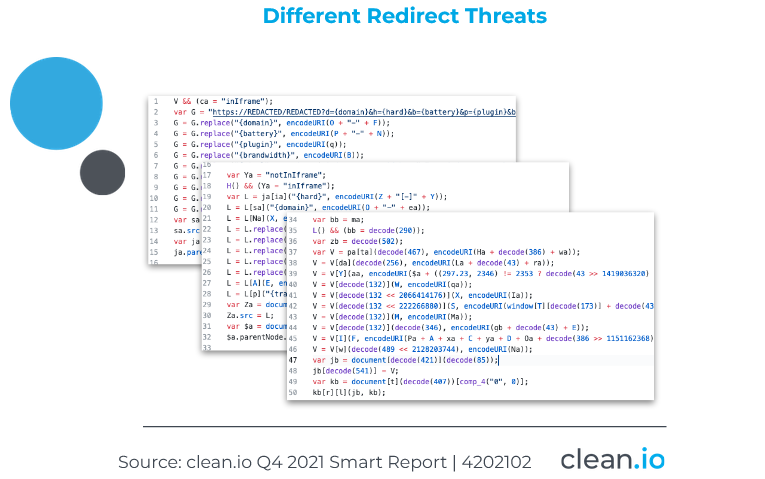 In Q4 2021, we continued to see increases in volume and heterogeneity of malicious landing pages threats, rampant on both standard display and native ads: 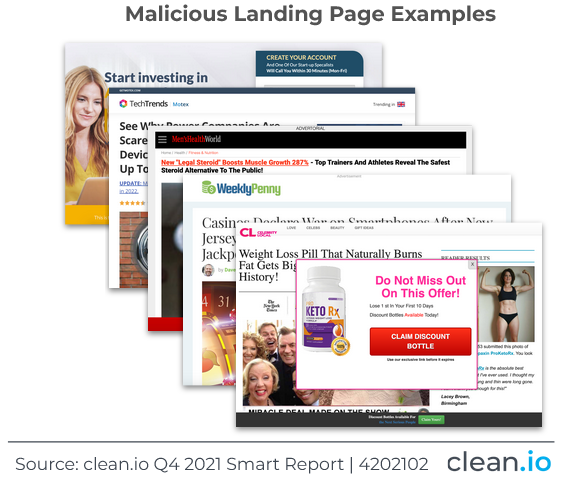 In Q4 2021, invisible ads were delivered in the billions, across hundreds of sites through just one of the schemes we track, impacting multiple SSPs: 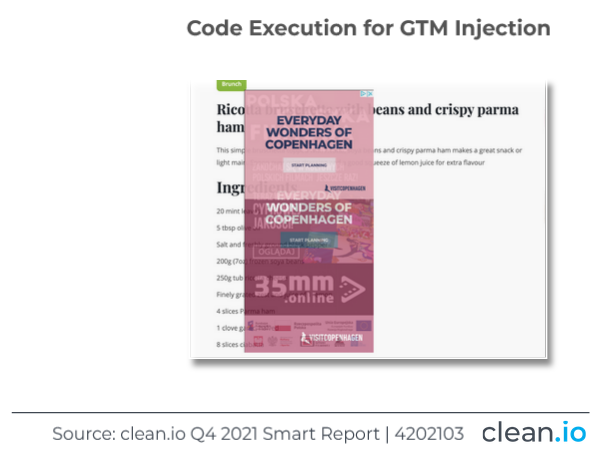 In Q4 2021, browser extensions were exploited in novel ways, including a yet another NEW threat which injects malicious code through Google Tag Manager: 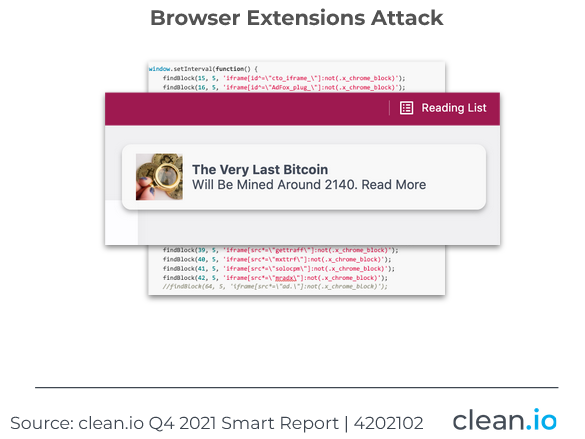 In Q4 2021, clean observed sites compromised by malware originating from websites use of “trusted” open-source projects, shared libraries, or other 3rd party code: 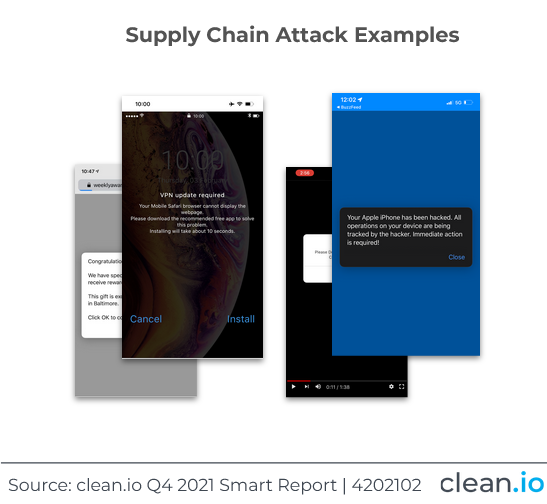 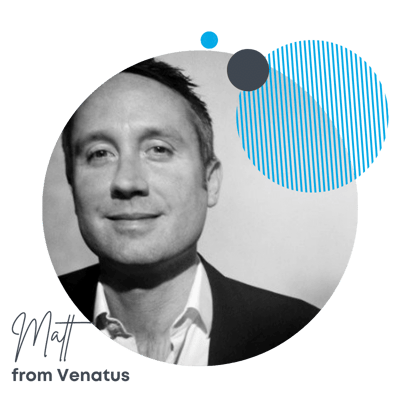 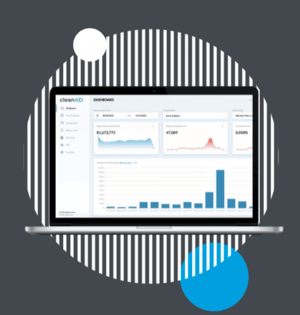 Threat Level in Q4 declined 46% QoQ, coming off an the elevated August and September levels that dominated Q3.

And while volatility decreased, we still observed increases around crucial Q4 events, specifically around BFCM and Christmas.

Q4 Threat Level might have decreased from Q3, but it was still 50-80% higher than the first half of the year. 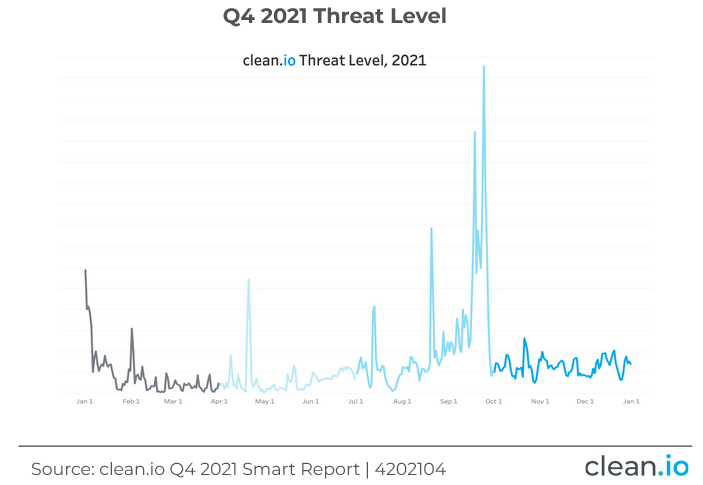 Germany and Canada were highest in Q3, both up 250%+ QoQ, followed by Netherlands, Finland, and France. 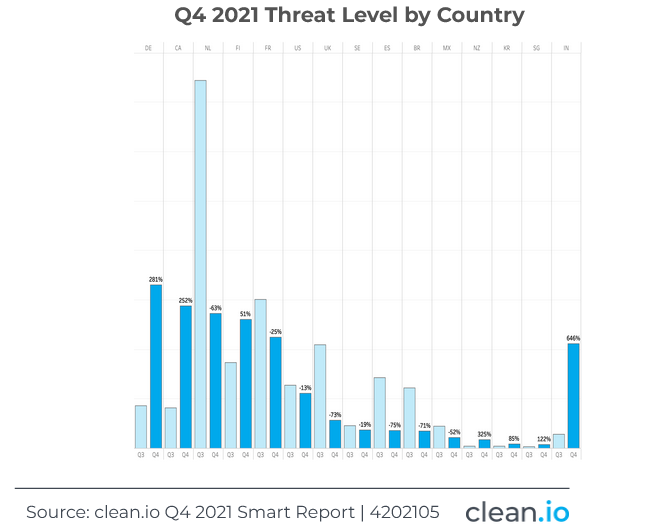 Q4 was the first quarter of 2021 not dominated by Mobile Web. 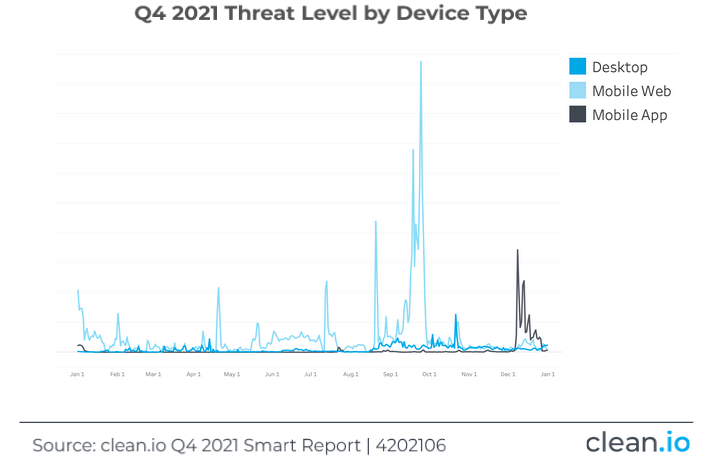 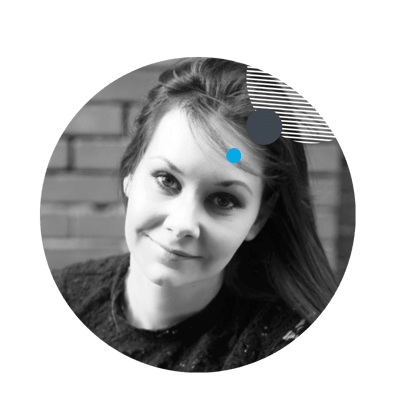 Make the Bad Guys Pay for Targeting Your Audience

“I love sticking it to the bad guys. cleanAD forces malvertisers to pay for their ads, and they get no return for their efforts. I feel vindicated knowing their campaigns perform worse as a result of the tools we have in place.”

Similar to Threat Level, Q4 was the first quarter of 2021 to see increases in desktop and mobile app attacks.

Threat volumes on Desktop ticked up (but down on Mobile Web), thus more distribution of attacks in Q4. 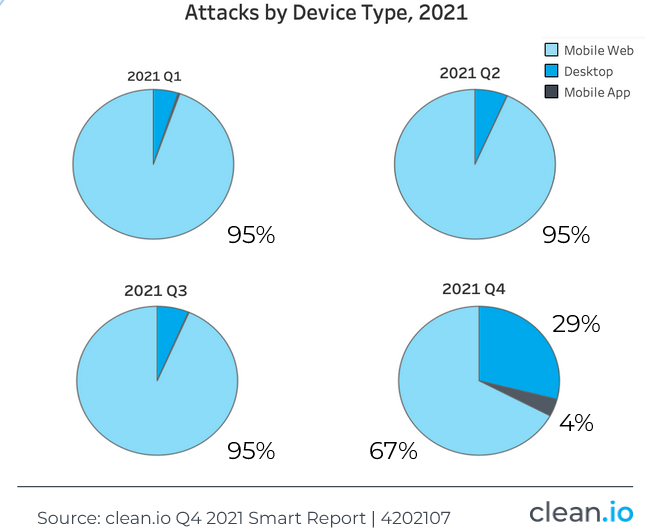 These browsers are inclusive of both Mobile Web (Embedded Browser) attacks, and traditional Mobile App attacks.

Facebook decreased in Threat Volume by nearly 90%, falling out of the #1 spot for the first time in nearly a year

With an increase in Desktop threat volume, we measured 4 desktop browsers inside the Top 10 (Chrome, Edge, Safari, Firefox).

All Desktop Browsers increased QoQ between 17% and 99%. 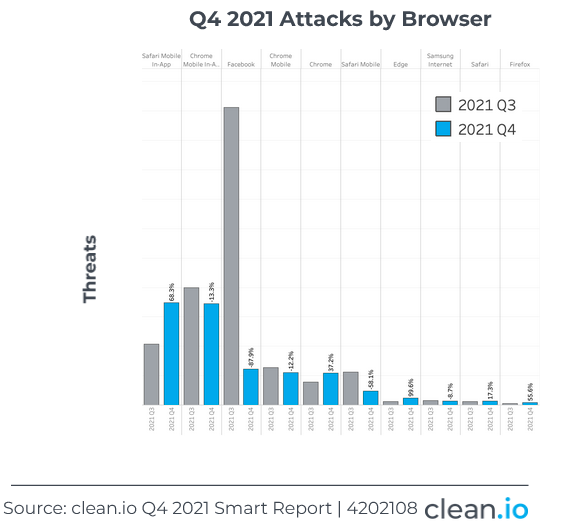 Chrome and Safari both experienced a large attack in Mid-October and was the largest attacked Desktop Browser consistently during Q4.

All desktop Browsers increased together around the holiday periods: December 10th, December 20th, and finally in the post-Christmas period.

Since the New Year, Desktop Browsers across the board have again seen large increases in attack volumes. 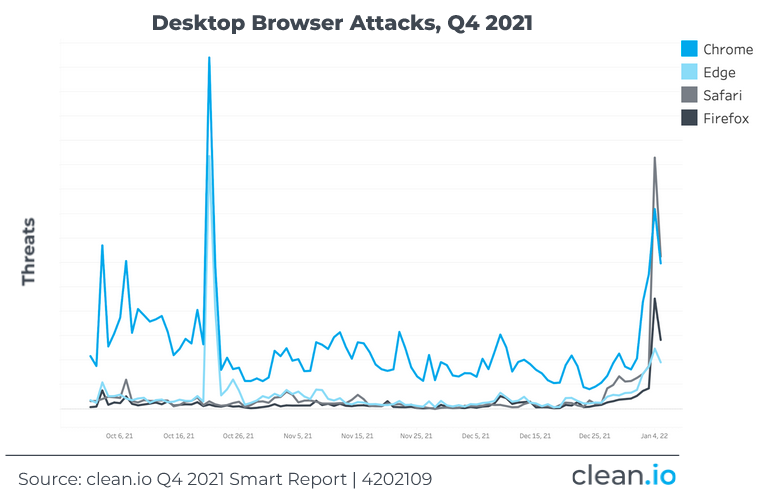 The rest of the Top 10 saw greater change in Q4 with much lower ranked SSPs jumping to the top spots. 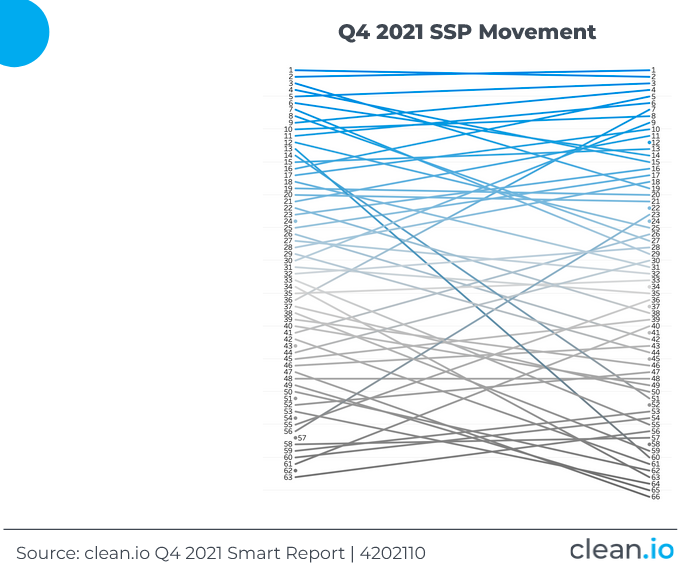 Threat class composition continued to diversify in Q4, with the top 3 attack types now responsible for less than 70% of attacks, down from 88% in Q3.

September & early October were dominated by a widespread crypto scam.

Several different redirect threats returned in December, rounding out the end of the quarter. 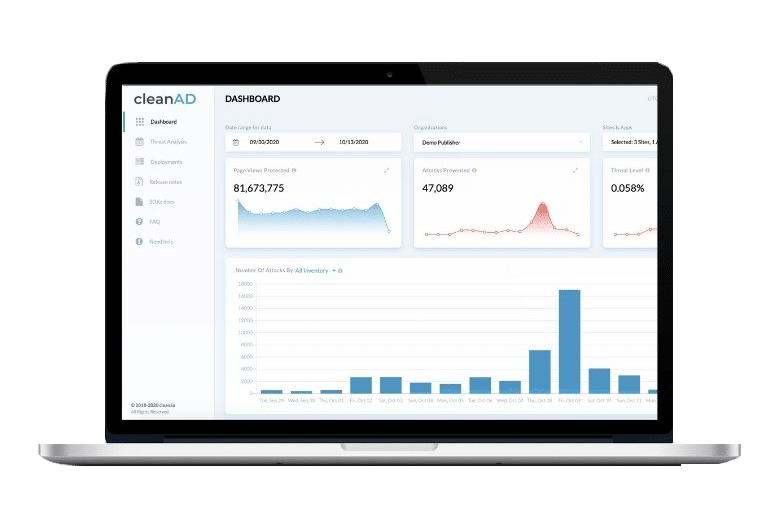