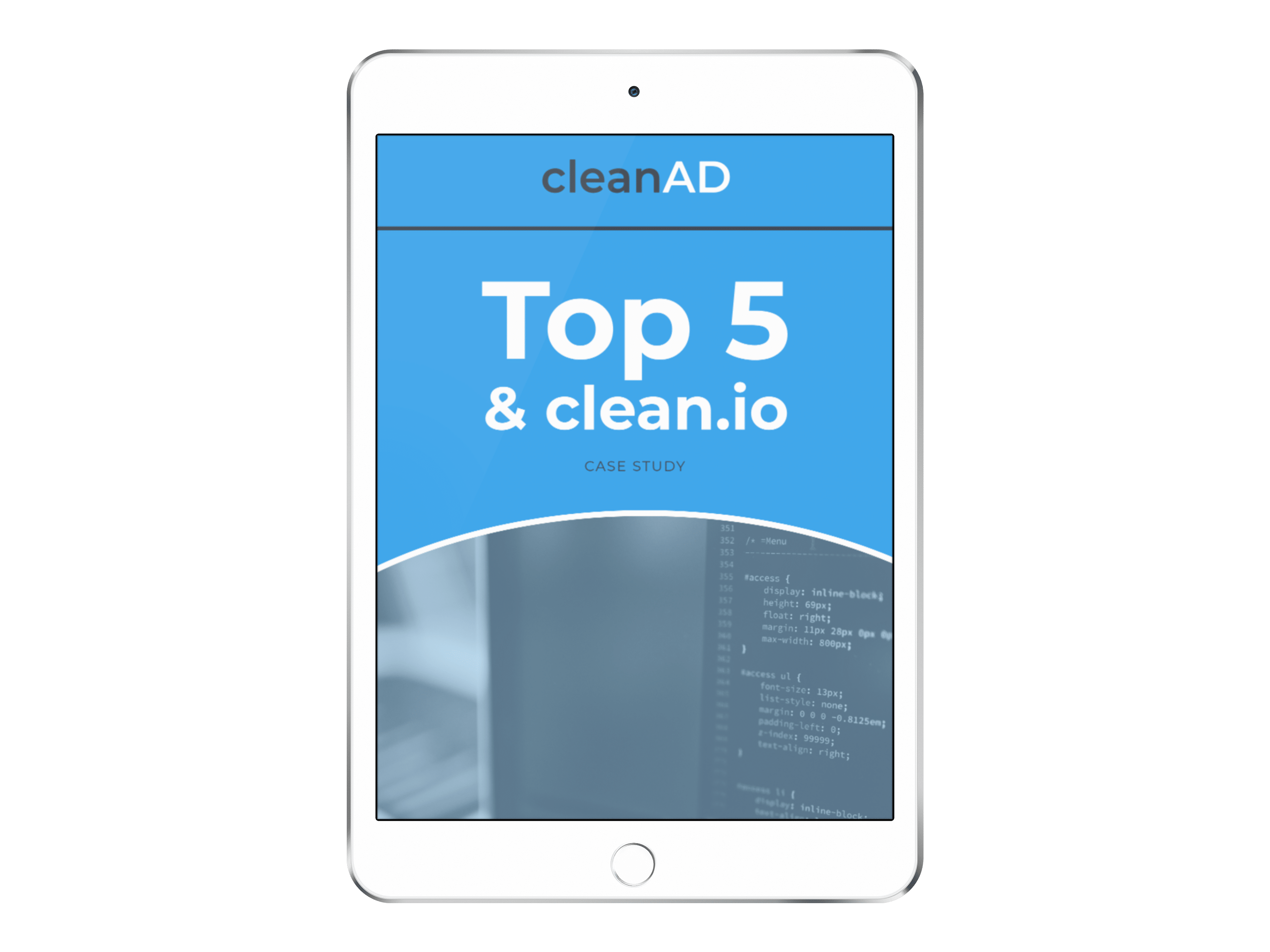 Top 5 is a leading review site. As a large digital publisher, the company provides consumer insights in the form of slideshows, comparisons and ratings, and site traffic is monetized through the use of digital ads. The company’s revenue is directly connected to traffic volume and visitor behavior on the site.

Length of stay, low bounce rates and traffic to affiliate links are all vital to Top 5’s continued growth, and these metrics were being hijacked by malvertising. While they were quickly detected, the attacks nevertheless did immediate damage to the company’s revenue and reputation.

Read on to learn how cleanAD immediately put a stop to malvertising and ad redirects. 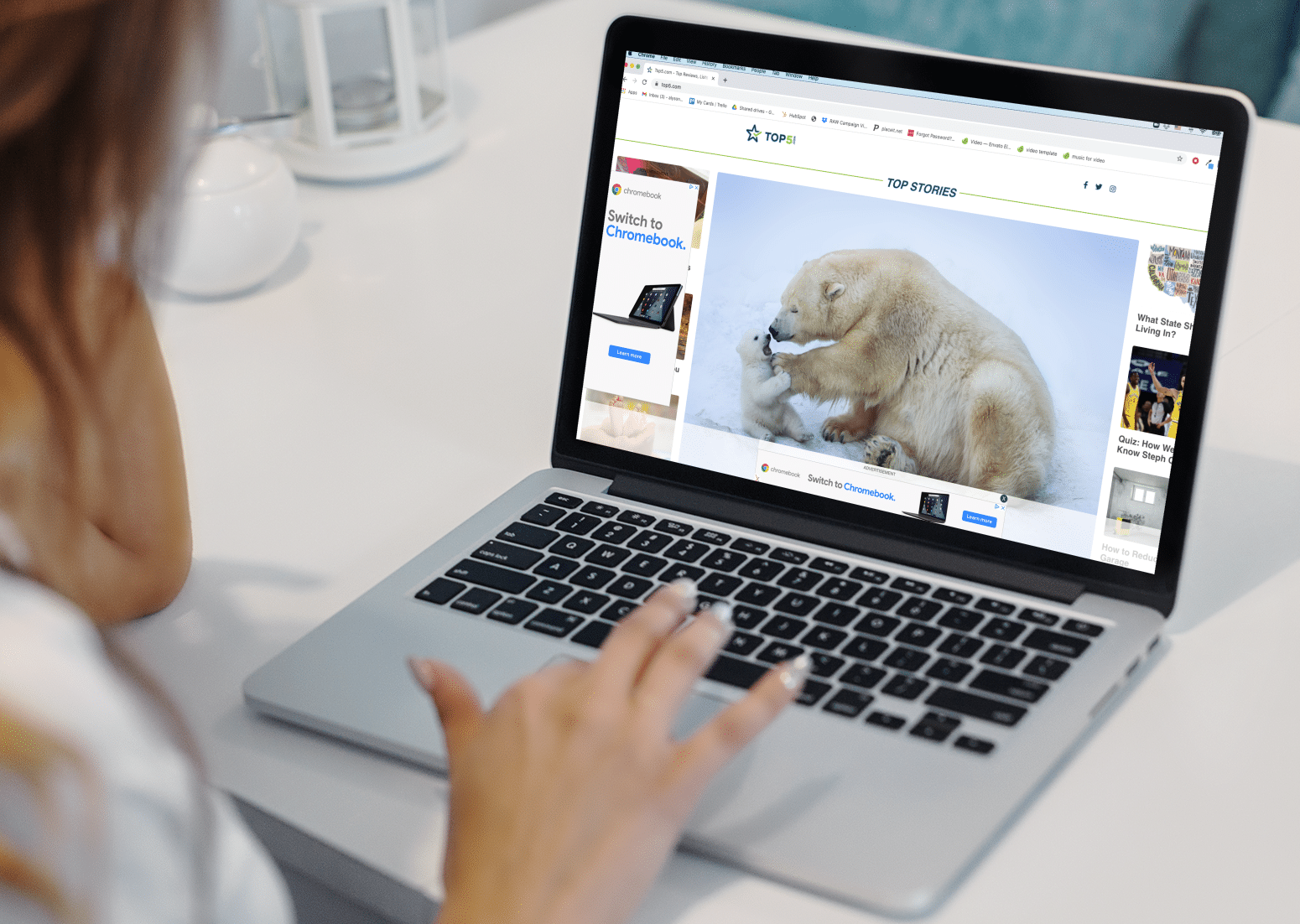 cleanAD protected Top 5’s users and revenue by implementing instantly effective anti-malvertising measures. Upon deployment of cleanAD, large-scale malvertising issues came to a halt, and the solution continues to prevent malvertising on a real-time basis while protecting the user experience on Top 5’s site.

What tipped Top 5 off to its malvertising problem were troubling numbers for many key metrics. Unexpected revenue and traffic slumps were connected not only to a specific date and time, but to specific positions within the site. When no technical issues or malware could be found, it became apparent that these issues were ultimately caused by unwanted and intrusive ads that were redirecting users.

Top5 implemented cleanAD, which uses behavioral analysis to eliminate malicious ad redirects while ensuring publishers still retain ad revenue. Unlike traditional malvertising solutions, instead of trying to prevent or intercept bad ads before bad actors pay for their ad impressions, cleanAD stops third party code on the client side and in real time.

Top 5 deployed cleanAD quickly and easily with the addition of a simple line of javascript on its site. Once up and running, cleanAD immediately put a stop to malvertising and ad redirects. Now, the team at Top 5 doesn’t give a second thought to malvertising and it has virtually become a non-issue for their site.

In 2019, the AdOps team at Top 5 noticed some strange monetary performance along with unexpected disruptions and dips in revenue. They approached CTO Doug Smith to get a better understanding of the factors driving the fluctuations in revenue.

These issues they saw clearly represented some deeper problems. Numbers fell both in revenue and in recurring website visitors. Top 5 regularly monitors these metrics, and began to notice how popular slideshows on the site weren’t seeing the same engagement they typically had in the past. Emerging trends indicated significant shifts in user behavior.

Because Top 5 is a high-traffic site with a team that regularly monitors performance, this issue was immediately recognized, allowing the technical team to quickly launch an investigation into the root cause of the problem. The team started by ruling out malware within their tech stack and problems with their code.

As they were looking into the problem, the Top 5 team started receiving user complaints. One interest piece in particular was generating a very large number of complaints, with users struggling to get access to later slides in the article. They were being redirected or having browser crashes, primarily on mobile devices. Users took to social media to voice these complaints, which heightened the urgency of the problem.

At this point, the Top 5 team realized they had multiple pages that were being redirected and began the hunt for a solution. It was important for Top 5 to find a solution that could handle an issue like this, on the scale of Top 5’s site and traffic. Many of the solutions they considered weren’t able to handle the volume or complexity of Top 5’s digital publishing properties. Then, the team at Top 5 found cleanAD.

After a call with clean.io, the team at Top 5 realized the solution—and the process to implement it—was very simple, and they installed cleanAD right away.

“Within hours, we were ahead of what was causing our issues.”

Malvertising literally hijacks user experience. Because Top 5’s users couldn’t get where they want to go on the site, or were directed to a clearly untrustworthy location, the company began bleeding both money and user trust. Having the right preventive solution in place was the only viable way to fix what was broken.

"I do that on the front and backdoor of every website. Why would I not be doing it on every ad tag or revenue earning opportunity within the system?”

With cleanAD, Top 5 no longer has to worry about malvertising. If user comments or complaints ever arise, the Top 5 team will check the dashboard retroactively to see if disruptions had occurred, but the system doesn’t require any regular monitoring.

Instead, cleanAD prevents malvertising in real time, shoring up site security and protecting the user experience. “I know that bad actors are always trying to find and exploit: they try to find a permission on a file that we forgot, find a login where somebody didn’t pick a good password. Things that I can’t always be personally responsible for but that are exploits that I will be held responsible for when the site stops earning or stops producing.

We’re gonna get hacked. The question is, what are the different layers we can put in place to make it as difficult, unwieldy and unfriendly to hack? It’s the citadel approach. We put as many hills and valleys as possible between hackers and the target.

cleanAD provides ad redirect protection for
digital publishers like Top 5, and is capable of
handling sites on a large scale. Ad redirects take users away from a site and consistently undercut publisher profit. This is an imminent threat for most publishers of this scale, and solving it requires an effective tool that doesn’t need constant monitoring.

“Not protecting my ad stack the same way I would protect the front door, the back door, the login door, the disclosure door or every other access to the site is foolish. All you have to do is be redirected one day on a PPM page and watch all the revenue walk away.”