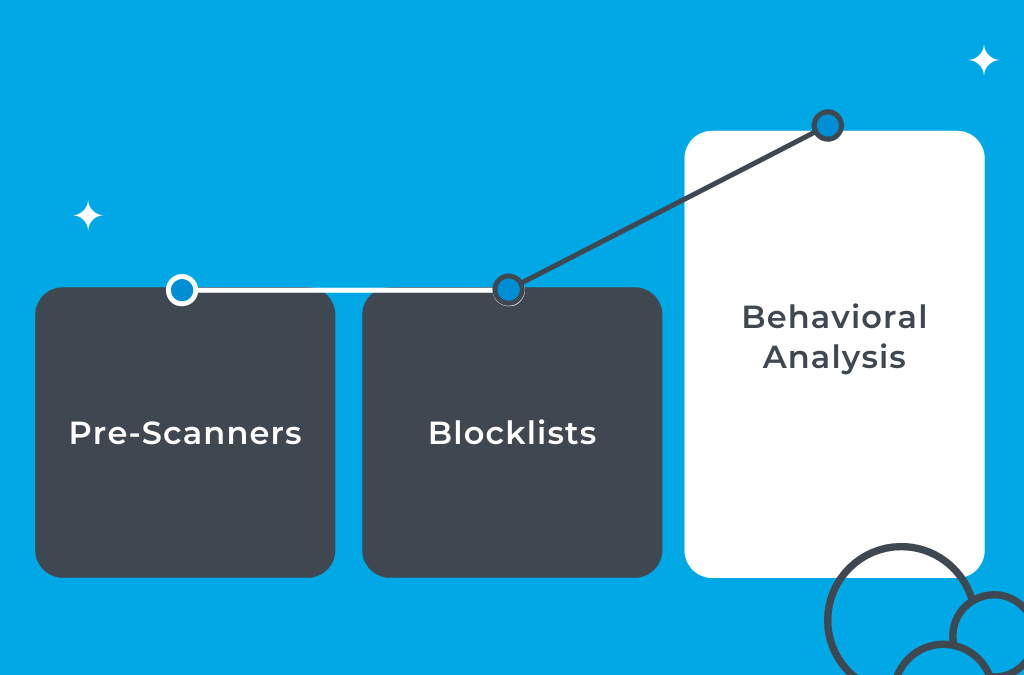 In general, there are three different categories of tools used to fight malvertising for publishers and platforms. This article will help you understand the differences of each type of approach, how they work, as well when they work to combat malvertising. In general, solutions fall into two major categories:

Timeline of a Malicious Ad

Before diving into how each of these tools works, it is important to understand when each of them works during the process of serving ads.

The infographic below demonstrates the steps a malicious actor goes through, and where the tools that are used to fight malicious actors inject themselves into the process. This article offers a full breakdown of each step in more detail.

The adtech industry has traditionally used the first two methods for attacking the problem (scanning tools and block list tools).

Scanning tools are used to pre-scan ad creative before for malware before serving the ad to users. Scanners seek to simulate the ad being shown to a user in an attempt to trick the malicious code to produce the malicious activity, before allowing that ad to be shown to real users.

Scanning Environment vs. Execution Environment: Because scanners are creating sandbox environments, and not running in real environments, malicious code is able recognize and show a different face to each environment, allowing bad ads to be shown to users.

False positives & negatives: Scanning tools have risks for both false negatives and positives. In an attempt to be conservative, they may label ads that were actually good, clean ads as malicious, preventing you from generating revenue on those ads. They also run the risk of missing malicious ads and letting them through to users.

Blocklist tools will compare the URL, creative or snippet used in an ad to a list of “known bad” URLs, creative, or snippets to try and catch malicious actors that have previously been identified.

As the website page, platform, or application loads content, blockist tools will check all ad creative that is supposed to display, and compare it against a list of known malicious bad actors to then prevent creative from loading (if the bad actor matches a previous known attack).

Requires known bad behavior: In order for a solution like this to work, it requires the bad actor to have already successfully executed a malvertising campaign at that specific URL and had that URL added to a blocklist. In short, this means that a subset of end users will be impacted by the malicious activity before it is stopped.

Unable to catch “novel” attacks: Because tools like this require previously known behavior from a specific URL, they are likely unable to catch novel attack types that they haven’t seen before.

Detection avoidance techniques: Bad actors can rotate the domains from which they execute their malicious campaigns, obscure the domain they are executing from or utilize targeted bypassing techniques to trick block lists.

Impact user performance: Because the ad creative has to be checked against a very large list of known bad URLs every time content is loaded on the page, it can incur latency which affects the speed at which the user sees content on the page.

False positives & negatives: Real-Time Blocklist tools have a higher risk of false negatives, allowing malicious ads to be shown to users when they can’t catch them. In order for these tools to work, they either have to make the block list very specific to make sure you can catch each bad actor, but that doesn’t work well at scale. To scale, they have to make the list broad, but then you run the risk of accidentally catching clean ads in your net.

CleanAD is one of the only tools on the market today that uses behavioral analysis to detect and stop malvertising.

We use the very behavior of malicious code against malvertisers to catch them in real-time while they are trying to serve malicious activity to real users.

Instead of running in a sandbox environment, cleanAD runs right on the page in the browsers or applications where real users are viewing ads. We look for behavioral patterns that indicate malicious activity, watch the execution of the code, and wait for the trigger of actual malicious activity to block the ad from displaying to users.

You don’t have to take our word for it. Recently on Reddit, a user asked members of the adops group for feedback on their experience with cleanAD.

Here was one user’s feedback on how our platform works differently:

“We are working with them as well and they are the best in their field.

Unlike other companies that are managing endless lists of BL and WL they came from cyber security field, they identify in real-time a JS that acting in a cretin behavior before hijacking a page and disable it. so the at the end the creative is being served you get paid and the malicious ad is being disabled”

cleanAD is able to catch malicious code by watching for certain behaviors like:

Some of the benefits of a behavioral analysis approach include:

Another user’s response to the Reddit thread details some of these benefits from their own perspective:

“they’re just one of the few companies I’ve worked with that do what they say.

haven’t thought about redirects for two years. after having spent the previous four years knee-deep in Charles sessions trying to figure out who the hell was to blame… they’ve been great.”

One of the most impactful benefits that have become apparent to users is the amount of time that is freed up for the ad operations team. Instead of spending all of their time chasing down redirects, they are now free to focus on more strategic activities.

Some of the other user responses to the Reddit thread, articulate this benefit:

“great support and they do what they promise. we don’t get reports of re-directs using them and it was a nightmare for the 5 years before that trying to manually police bad buyers and manage angry users. highly recommended.”

“you can actually set it and forget it, they actually do what they promise”

While it may sound too good to be true, we promise it isn’t. And we are willing to stand behind that promise.

You can try the platform completely free for 14 days and see for yourself just how powerful it is.

Come see what all the fuss is about:

“We have worked with them , actually still working with them. By far best out of all of them. We tried Confiant, Adlighting and they were okay but CleanIO best”

And ask yourself, what could you do if you didn’t have to spend all your time chasing redirects?