This past January, popular independent analyst Benedict Evans published his yearly presentation on the macro and strategic trends in the tech industry. I

sat down recently with clean.io co-founder Seth Demsey to get his insights on the trends the report highlighted relating to the future of ecommerce.

Here’s what he had to say: 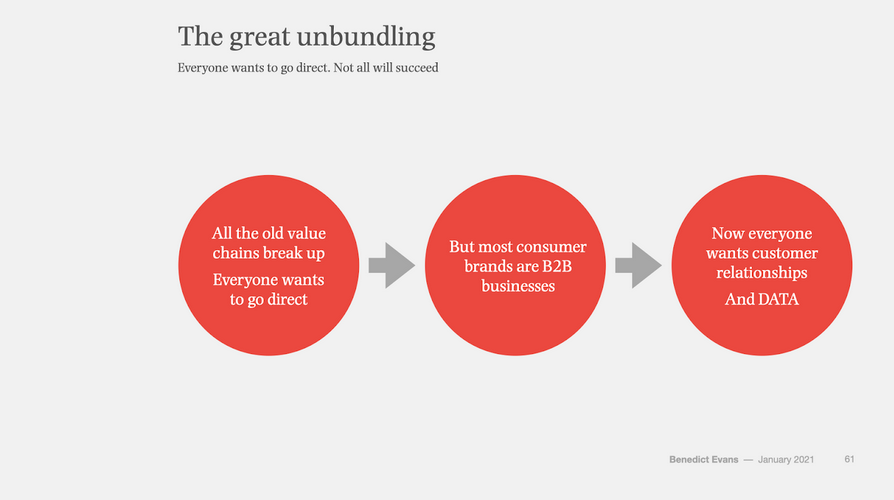 The overarching theme of Evans’ presentation is the “Great Unbundling”. When it comes to ecommerce, you’ve said there's a lot to back up this “unbundling” notion. Can you dig into that a little bit more?

The fact that more online retailers are moving to headless commerce systems is an indicator that sellers want more control over each element of the customer experience, from the cart and the checkout to the public-facing website.

Instead of just moving products, they want to curate their own experience. It's the inevitable reality when retailers want to customize beyond the limits of a pre-configured platform.

I don't know if I would necessarily call it “unbundling”.

To me, it's deconstruction.

Have you ever gone to a restaurant and had a deconstructed eggs benedict? I want to have different versions of the meal than what might be on the menu, and put it together how I want it.

Platforms like Shopify are monolithic even though they have a marketplace. They have limitations in that you still have to play by their rules and interact in the model that they want.

Instead of having a whole bunch of tools and services that are meant to operate independently, where you choose them and then wire them together, you have to make them play nicely with Shopify's system.

Ultimately, there will be some brands - smaller brands, perhaps with fewer in house technical resources or less unique needs, or that don't have the means to customize at the level that they may want to - that stick with the pre-packaged platforms such as Shopify, while the brands that have more ambition, time, or need will deconstruct their solution into separate components.

Deconstruction—or unbundling as Evans calls it—is a much bigger lift, but ultimately gives you a lot more flexibility.

So is it about taking every little piece of your business and finding your best solution for that piece?

Yes, and knowing that if you change your mind, you can easily swap each element out for something that does a better job of meeting your needs.

It also means you're not all-in on one platform, so it lowers some of the business risk associated with being dependent upon a single solution provider for something so essential to your business model. 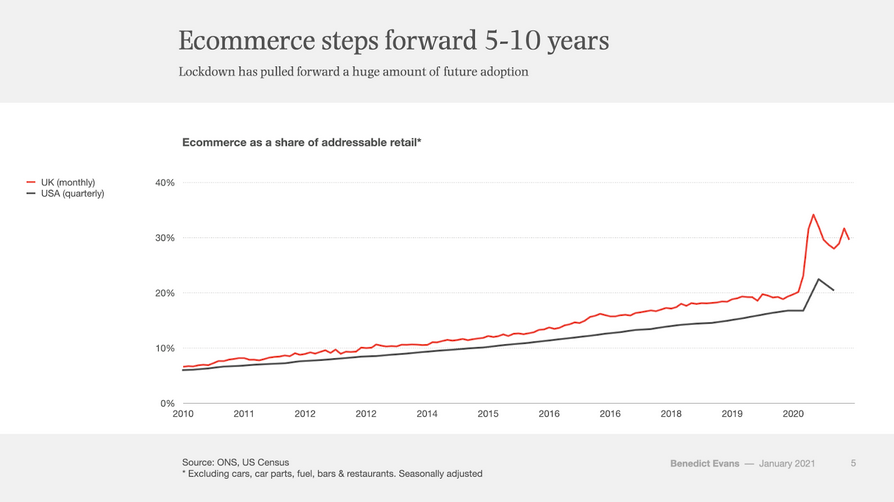 How would you say COVID has affected the pace of deconstruction?

Given more people are shopping through ecommerce, COVID and lockdowns created a massive opportunity for retailers who were willing to offer an integrated solution. Now that the volume of ecommerce purchasing is larger, it’s become more of a priority for retailers who otherwise would not have had ecommerce in their near term roadmap to capitalize on this market by expanding their digital commerce footprint.

Can you speak to the sudden expansion of ecommerce platforms such as Shopify?

Retailers don’t want to be disintermediated by platforms like Amazon. They wanted to have direct relationships with their customer and be able to define the experience.

The danger inherent in relying on Amazon for your ecommerce business is that your product gets “Amazon’d”.

I read an article last week about a beautiful messenger bag that was being sold for $120 on Amazon. There was a lot of demand for it and the retailer was seeing success. Now, there's an Amazon Basics version of it for $39. And it's the same bag,

It's despicable, and it’s why Amazon is going to get broken up. Did they really need to cheat the messenger bag maker by offering an exact copy of the bag for one third of the price?

Do you feel like Amazon is the opposite of unbundling, that it's the one piece of the ecosystem that is consuming everything?

Even the companies that are building their businesses on Shopify are using Fulfillment by Amazon because FBA is incredible.

Fulfillment by Amazon is when you have your pallets delivered to Amazon, and they do the pick, pack, and ship, via an API, from their warehouses and with their shipping rates. It's amazing.

They are the ultimate unbundler.

Do you sense that Amazon is using that data to decide what to make themselves next?

Yes, absolutely. Their decisions about which private label products to introduce are made using that data. They see there's a real demand for certain products and decide to just make the products themselves and sell them at a lower price point. 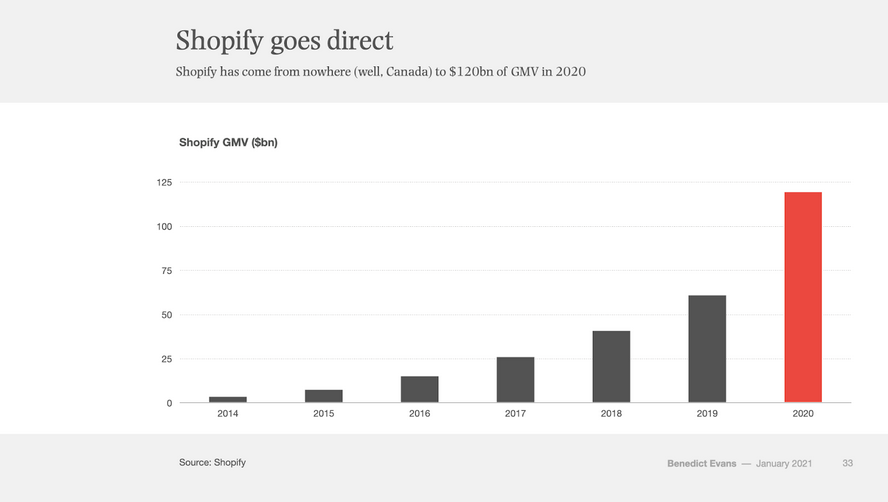 Why is Shopify specifically growing so quickly? There are certainly other ecommerce platforms out there for retailers to use.

Websites built on Shopify look good by default. It has a lot of templates and is configurable enough to please most customers.

Its marketplace has a critical mass of affordable, gap filling components that online retailers can use to build their own stack, and there's a lot of agencies who will help to get new sites up and running for a very modest fee.

That secondary ecosystem of integrators is why platforms win at this stage.

If there are five hundred shops that know how to use your commerce platform versus five shops, and people selling their services to work on your product because they know it's a good product that customers want, you're going to have an ecosystem around it that self fulfills.

So I think that Shopify is doing a really good job with its agency channel, though I think that it's very early in the evolution of the channel program and it’s still hyper fragmented. 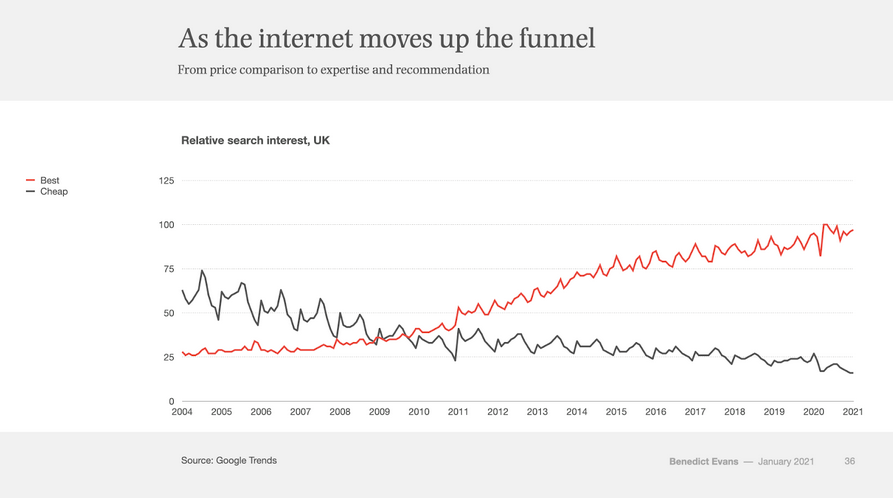 Do you feel as though the way shoppers have changed their search methods has also changed the way they make purchases?

There's an overlay to this. In the old days, all ecommerce was doing was taking the same stuff that was on the shelves in brick-and-mortar stores and providing shoppers a way to buy it online.

More and more, what we're seeing as ecommerce grows is specialized, vertically integrated brands that are creating and selling new products that aren’t available anywhere else.

It's not like you're going online to shop for the Timbuk2 messenger bag and trying to see if Dick Sporting Goods has it cheaper than Amazon or Nordstrom. Instead, what we’re seeing is many bags that are all subtly different. They may have micro brands and influencers, but the only place you can get their product is from their brand’s online store.

A lot of it has to do with the fact that the most prevalent online brands with successful ecommerce shops are not stores like Sunglass Hut. It's Pit Viper, who have built their own brand of glasses that you can only get from their store, and that are building a story and culture around it.

That's best for the people who are interested in it, but also turns into a very fragmented market. It's no longer about price comparison. Instead, the value is in the quality of the product and the brand. 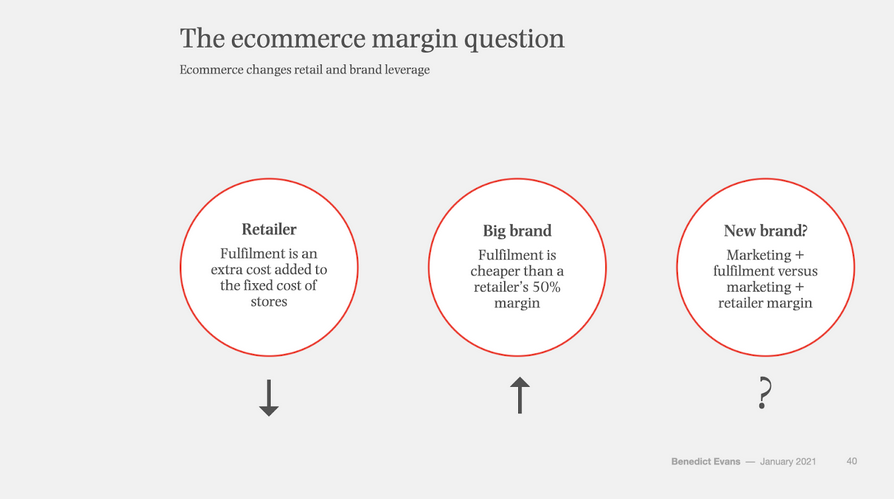 I'd love to get your thoughts on retail margins, because we hear so much about retailers on Amazon and other channels having very thin margins.

I used to sell guitar products that I made from scratch. I would sell about 100,000 guitar tuners a year. We would produce them for $18 each, then we'd sell them wholesale for $25. The retailers would then sell them for $79.99 and they would barely make any money off that gap once all of their costs were factored in.

What we’re seeing now are these vertically integrated ecommerce brands that have become much more efficient than traditional retailers. They'd rather own their customer relationship than be disintermediated by Guitar Center because it allows them to sell you their product with a more personal user experience.

One of my favorite direct to consumer (D2C) retailers is Pit Viper. The founder Chuck Mumford’s emails are hilarious—so much so that I actually look forward to receiving them. It is content that is entertainment to me. And he couldn't have done that if he sold through Amazon or Dick's Sporting Goods.

What we're seeing now is that even big stores that are selling more commodity merchandise are trying to inject that similar sort of style into their marketing.

What does it all mean for online retailers?

Seth's insights, and the trends that Benedict Evans highlights relating to the future of ecommerce, offer food for thought for online retailers as they adapt their ecommerce strategy to the new reality.

From choosing the platform(s) on which you build your ecommerce website, to determining whether to sell direct or through Amazon, and how you approach building a brand that customers will love, the trends that played out in 2020 will continue to influence the success of ecommerce brands for years to come.

Stay tuned for part two next week, when I speak with Seth about how the “great unbundling” is impacting the world of advertising technology.